If you’re ever on set with Rock Creek, you might hear some strange or curious terms.  To alleviate any confusion, here are a few definitions you might enjoy.

Skōsh – a little bit; as in “move that light a skōsh to the right.”

Apple Box – multipurpose wooden boxes, e.g. useful for sitting on, raising the plant in the background a bit, or making a shorter actor taller; e.g. “Put Tom Cruise on an apple box.”

Pancake – Apple boxes come in a variety of sizes:  full, one-half, one-quarter, and, yep, you guessed it….

Boy/Girl – an even mix of daylight and tungsten color balanced florescent tubes in a fixture.

Salt and Pepper to Taste – an uneven mixture of daylight and tungsten color balanced florescent tubes in a fixture; used to warm or cool a scene.

Stick-ups – small, battery-powered LED lighting fixtures that one can ‘stick up’ onto anything.

Floppy – a 4’ by 4’ black flag with extendable fabric used to block light.

C-47 – A wooden clothespin; used to secure diffusion and colored gels to lights (the name originates from its catalog designation)

Grip – the name for a broad category of hardware and fixtures used to control light, or the person who deals with it

Gag – any device placed in front of a light and used to change or control the way light is striking an object, or to create shadows.

Schmutz – typically diffusion that we place in front of a light to soften it; or, alternately, dirt on the lens or on a monitor; as in, “Wipe that schmutz off the lens, man!”

C-Stand – a sturdy, multi-purpose stand to hold lighting and grip equipment; named for the Century company, an old Hollywood establishment.  C-stands come with arms and knuckles for attaching all manner of stuff.

Martini Shot – the last shot of the day, right before Martini time.

“This has been another fine Rock Creek production” – that goes without saying…, but typically our Martini shot.

(As always, thanks to Donny Aros for keeping the verbiage lively on set.) 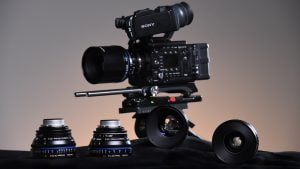 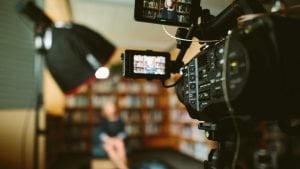 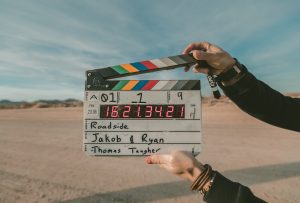