Over the past few months we’ve been working on several marine firefighting training projects for the Department of Defense and the US Navy. One of the great things about our job is that we are often given unique opportunities, and this work was no exception.

Aimie Burns was christened our Captain Director for this Marine Firefighting Project.

While at Norfolk Naval Base we were granted permission to film on board the USS Boise, a Los Angeles-class nuclear submarine. It was the first time many of us had the opportunity to explore a submarine. Even though the “cool” factor was off the charts, it proved an extremely challenging environment to work in, as every space was tight.

Shane Peters and Mike Teeters take a moment to breath recirculated air inside the USS Boise.

If filming in a submarine is difficult, try being a firefighter in full bunker gear with a breathing apparatus on your back, pulling a charged fire hose and navigating those cramped spaces. Props to them!

In addition to spending two days on the USS Boise, we also filmed on the USS San Jacinto, a Ticonderoga-class guided missile cruiser. This ship seemed enormous in comparison and we felt we could spread out, even though we were still working in constricted spaces. The shipboard crews and base firefighters working with us were helpful and enthusiastic and did everything they could to ensure we captured what we needed. 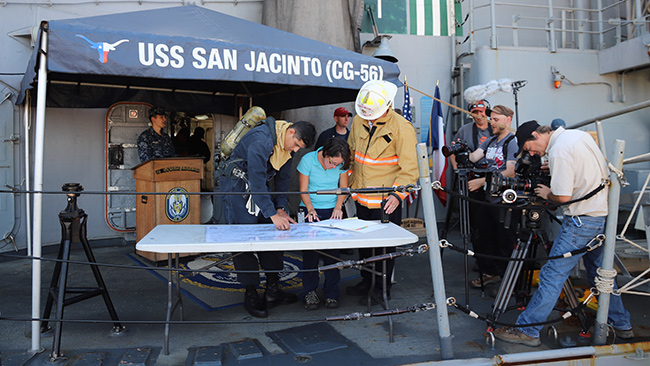 This project focused on teamwork between on-board and shore-based firefighters to fight marine fires.

This project also took us to the Military Ocean Terminal Sunny Point in Wilmington, NC where we spent four grueling days aboard the SSG Edward A. Carter, a commercial container ship. Even though we were told this was a “small one” in the world of container ships, it was still an easy five-minute walk to get from the bow to the stern – they said it was nearly four football fields long! Needless to say, we got our steps in that week. 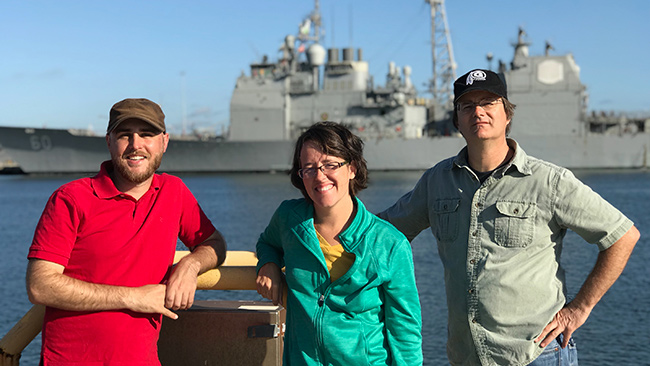