Doing Our Part To Flatten The Curve

Recently, Rock Creek was contacted by Dr. Shannon Dowler, the Chief Medical Officer for NC Medicaid at the North Carolina Department of Health and Human Services to help produce a short video on the importance of Telehealth during the Covid-19 pandemic.

We used video that was recorded remotely by various medical professionals from their homes and offices around the state. Given the urgent nature of this work, our editor Alexis was able to quickly turn this piece around in only a matter of days from the safety of her own home edit suite. We’ve also produced a shorter 1-minute version for social media distribution — an absolute must-have in today’s digital landscape!

Telehealth provides many options for consulting a medical professional in non-emergency situations. It is a proven method for reducing the risk of infection to others in your community as well as those in the medical professions we rely on during these trying times.

We’re thrilled that it aired during one of Governor Cooper’s daily press conferences on the unfolding situation in North Carolina. This was an incredibly fulfilling project to take part in. It is an honor to play even a small part in ensuring the continued health and prosperity of our communities. We want to share this project with you because it’s critically important to inform the public about these Telehealth options.

We encourage each of you to seek information on options within your own state or community so we can continue to flatten the curve!

Staying Up During the Shut Down

It might not be the right time to film an action scene with a hundred extras, but it’s still a great time to keep your messaging active, stay connected to customers, and plan for future productions.

…by planning, researching, and virtually consulting with experts and stakeholders
…by developing content, creating storyboards, and writing scripts, and other preproduction planning
…by recording professional voice-over narration or even taking your self-
recorded narration into postproduction
…by developing motion graphics, animations, or text treatments
…by manipulating archival still photos and applying stock footage
…by selecting music and mixing sound effects
…by creating captions and compressing final products for online and social
media distribution.

We can create your video programming, almost like normal.

We can produce effective, professional messaging for you.

With the rest of the world shut down, imagine being able to stay up.

We’re all safe at home, edit systems ready. Our communications and media portals are active. Rock Creek can keep your video content alive and fresh. We can help you stay visible and in front of your customers and your employees.

Give us a call, send us an email.

To find current CDC guidelines about how to protect yourself and your loved ones, please visit the CDC COVID-19 website.

By Mike Chirieleison on September 11, 2019 in Blog

It is with both heavy hearts and excited anticipation that we announce the departure of our friend, colleague, and Rock Creek family member, Aimie Burns, as she embarks on the next adventure of her career. Aimie is moving on from Rock Creek at the end of this week as she has accepted an exciting new position as a Producer/Editor with Discovery Education’s Corporate Education Partnerships Video Hub.

During her time with Rock Creek, just a few of Aimie’s highlights include filming on the nuclear submarine USS Boise and the USS San Jacinto, a Ticonderoga-class cruiser, experiencing the everyday workings of the TSA, filming car-chase scenes with the Border Patrol, spending weeks filming training with Air Force firefighters (and then donning bunker gear afterwards), filming on the Waccamaw River from kayaks, photographing infants for the USDA, and of course her many years of award-winning work with the United Way of Asheville and Buncombe County

Of course, we would be remiss not to mention Aimie’s Emmy nomination for her documentary, Peace Through Education: Stealing the Light, about Mohammad Khan Kharoti and his mission to build a school for boys and girls in his war-torn home village of Shin Kalay, Helmand Province, Afghanistan.

We know that Aimie is at just the beginning of a long, exciting career and will go on to do great things! We at Rock Creek are proud to have played a part in her growth as a producer, filmmaker, editor, and overall wonderful person – and we’re appreciative of her significant part in the growth and success of Rock Creek over the past dozen years. We’ll miss you, Aimie and wish you the best of luck on your new adventures! Don’t forget the little people! 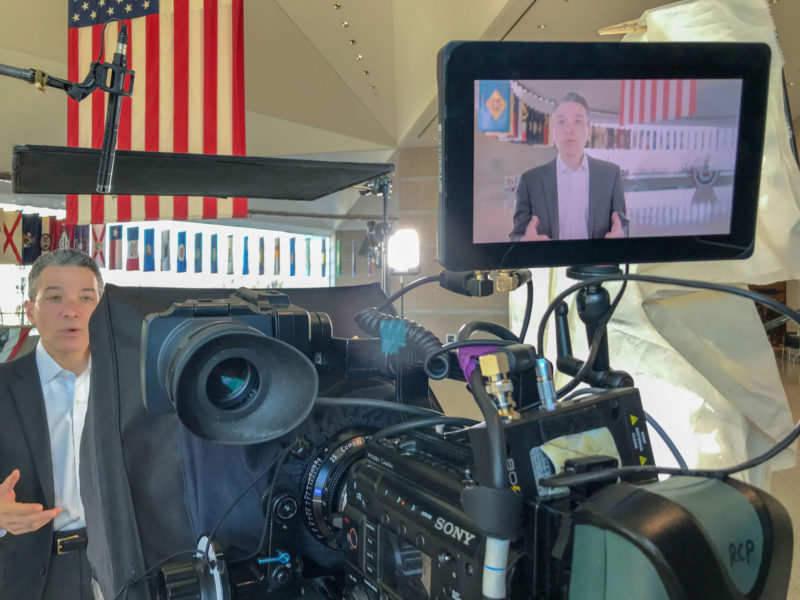 On The Road Again…

By Mike Chirieleison on February 4, 2019 in Blog

We’ve had a busy start to 2019, despite the government shutdown.  Luckily, our Department of Defense clients are fully funded and our commercial clients have kept us hopping.  In addition to local shoots at the Supreme Court, Quantico, and in our Herndon, VA production studio, we had productive trips to Longmont, CO and the Boston area where we had a two-fer:

As part of our well received series of Small Business Innovation Research “Success Stories” we visited ANDE, a company that makes a portable, ruggedized, and rapid DNA identification system where we interviewed the inventor, Dr. Richard Selden and shot loads of broll in their facilities and labs. 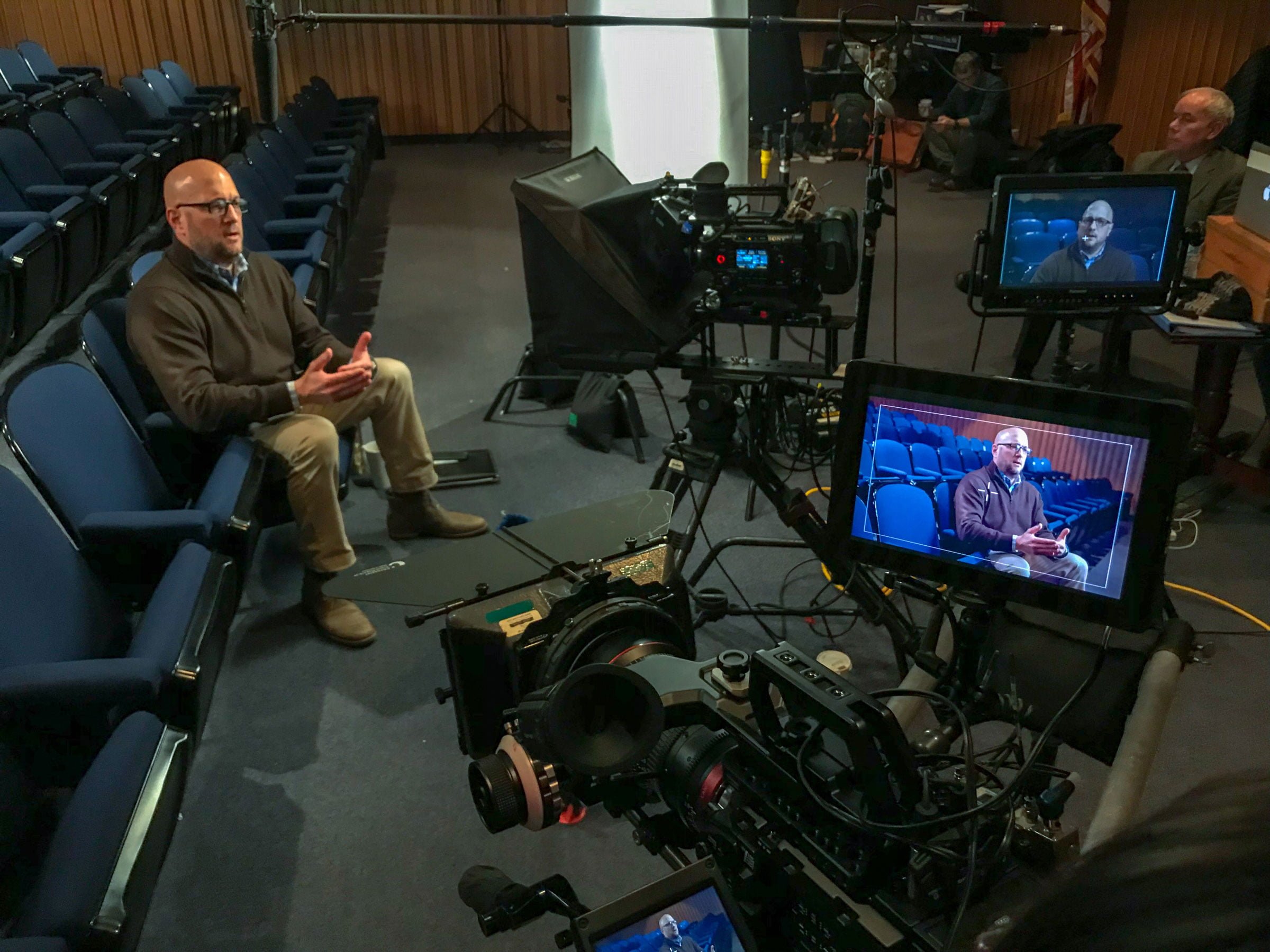 Interviewing US Air Force personnel about their work in rapid acquisitions, responding to some of our nation’s most urgent threats.

And the second part of our Boston excursion was devoted to our DoD contract to produce a series of videos on the Urgent Acquisition process.  We spent a couple of days at Hanscom Air Force Base interviewing subject matter experts and gathering valuable broll.

Producing a video on Religion and the First Amendment with NCC Director Jeffrey Rosen.

Following Boston, we took a quick trip to Philadelphia to shoot another in our series of First Amendment videos geared towards high school students for the National Constitution Center.

We’re thankful to have had such a busy start to the year and look forward to what the rest of 2019 has in store. We won’t be slowing down in February as we head out to Indiana, then Alabama, the Pentagon, and back into our studio again for several weeks of filming! 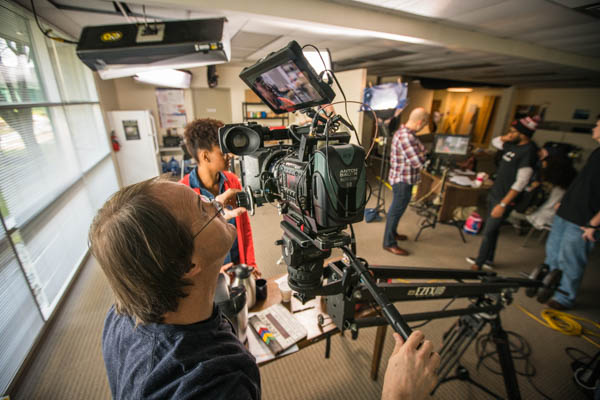 Wrapping Up 2018 With A Bang with CTEC and DAU

By Mike Chirieleison on January 8, 2019 in Blog

Before enjoying a restful holiday season, Rock Creek recently wrapped up our 2018 with a fun and exciting three-day production at our studio in Herndon.

Our client, CTEC, required five different sets; a cubicle-filled office environment, a break room, a small conference room, a small private office, and a reception area for one of their online video training programs for federal government employees. When we moved in at the beginning of 2018, this is the exact type of project we envisioned our new studio being the perfect environment for. With its over 5,000 sq. ft. of space, we’re able to build and host multiple sets at once. 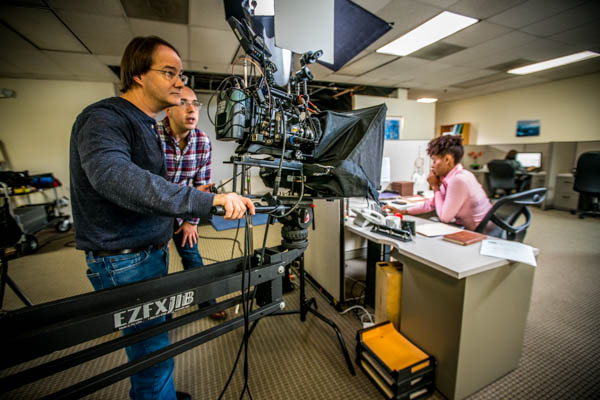 Last year proved to be a very busy year for Rock Creek and CTEC. We helped produce several video training series for the Defense Contract Management Agency (DCMA), including one requiring a bit of special effects work where our main character traveled 10 years into the past to pay himself a visit on his first day on the job.

Rock Creek always enjoys the new and interesting challenges that our clients provide, and we encourage everyone to think creatively when approaching us with an idea for a script or seeking our creative input.

We look forward to seeing what other types of sets and environments our clients need for their productions in 2019!